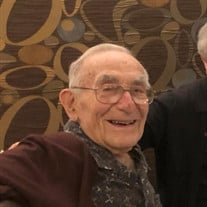 Ben-Zion Taber, age 94, died at his home in El Paso on Saturday, Dec. 25, 2021. He is survived by his wife, Ruth Migdal Taber and his wonderful children and grandchildren: Joan (Keni Lorber) daughters Sarah and Miriam, Susan (Lee Weisz) and Dave (Laura Moll) sons Evan and Jeremy. He was born in Providence, R.I. and enlisted in the Navy when he turned 17. After service he returned to Brown University for his undergraduate degree and received his medical degree from Harvard Medical School in 1952. He was Board Certified and a Fellow in the American College of Obstetrics and Gynecology and practiced Obstetrics and Gynecology in El Paso from 1958-1963. The family then moved to the east coast where Dr. Taber served as an expert on the newly discovered oral contraceptives for the U.S. Food and Drug Administration (FDA). The family moved again – to Palo Alto, California –where he accepted a position as Medical Director and Vice President of Syntex Corp. Ten years later he was appointed Clinical Associate Professor of OB/GYN at Stanford University Medical School and became the director of the Santa Clara Valley Medical Center Department of Obstetrics and Gynecology. In the 1980’s he practiced OB/GYN privately in Los Gatos, CA. Dr. Taber was a prolific writer. He authored the classic “Manual of Gynecologic and Obstetrical Emergencies” – published by Saunders - in English, Spanish, Italian and Japanese editions. He also wrote “Proving New Drugs” (1969) based on his experience in the FDA which explained the long tedious process involved before new drugs could be safely released for use by the public. In addition to many scientific papers in medical journals, his second love – travel – resulted in numerous articles about medical history around the world. Dr. Taber and his wife, Ruth retired to El Paso in 1990. He said it was the best move he ever made! Graveside Service will be held on Thursday, December 30, 2021 at 2:30PM at Ft. Bliss National Cemetery, with Navy Honors. Those who cannot attend in person may join the funeral and memorial services virtually on Face book Live at https://www.facebook.com/sunsetfuneralhome/ (no account is needed). A special thanks to Ms. Lorena Lobera who helped Ruth care for Dr. Taber during the past year. Donations honoring Ben’s life may be sent to www.templemountsinai.com Services entrusted to Sunset Funeral Home-West.

Ben-Zion Taber, age 94, died at his home in El Paso on Saturday, Dec. 25, 2021. He is survived by his wife, Ruth Migdal Taber and his wonderful children and grandchildren: Joan (Keni Lorber) daughters Sarah and Miriam, Susan (Lee Weisz) and... View Obituary & Service Information

The family of Dr. Ben-Zion Taber created this Life Tributes page to make it easy to share your memories.

Send flowers to the Taber family.