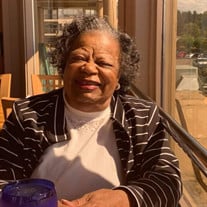 Proverbs 31:31: "Honor her for all that her hands have done, and let her works bring her praise at the city gate” Cathy H. Martin was born September 5, 1933 in Dallas, Texas and departed on October 18, 2021 in Renton, Washington. Cathy was a dedicated and obedient follower of Christ. Not by faith alone, Cathy was a fastidious worker. Cathy was born to Mattie Carter and Oscar Lyons. Cathy along with her brother Joe and sister Maxine, attended public schools in Dallas until she moved with her mother, siblings and her aunt Susie Mae Street, to El Paso, Texas in the early 1940’s where she attended Douglas Elementary and middle School. Cathy later moved to Shreveport where she attended Booker T. Washington High school, graduating in 1954 and welcoming her first born, Michael Joseph Martin. In 1959 Cathy was joined in marriage to Hollis R. Martin, and in 1964, this union brought the birth of their daughter Deidra Martin. Cathy always had a thirst for education. She Attended Southern University, Baton Rouge, Louisiana where she earned a Bachelor’s in Secondary Edu. Upon graduation, Cathy moved back to El Paso and was hired by the El Paso Independent School district as a teacher, where she taught hundreds of students for over 30 years. Later during her career, Cathy obtained a Masters of Edu from Southern University. Cathy was true lover of technology and current events. She was always listening to her favorite gospel video on YouTube or reading news on google. Her favorite shows were “The View” and “Jeopardy”. Cathy was a registered and active voter throughout her life. She was also an activist who cared about current events and matters that affected her community. Cathy loved traveling, having visited many European countries as well as the Caribbean. Cathy also had a wonderful sense of humor. Cathy was a faithful and talented worker in the church, taking her children to church and engaging in various activities such as the National Baptist Convention, Sunday School and various Missionaries. While a member of Shiloh Baptist Church in El Paso, TX, Cathy was a proud director of the “Sunbeams” choir. Cathy made sure she helped anyone in need who passed her way and touched many through her generosity. Cathy’s life testament is truly that it is better to give than to receive. She was an active member of the Pilgrim Rest Missionary Baptist in Renton, WA, where Ricardo Lockhart is her pastor. Being the social butterfly that she was, Cathy belonged to various organizations such as Phyllis Wheatley Club, Birthday Club, Sun City Lions Club, AAUW – El Paso, Chapter, as well as the Southern University Alumni- El Paso, TX and Seattle, WA chapters. Cathy never met a stranger, and her smile and gift of conversation was magnetic and infectious. Cathy leaves behind beloved son Michael J Martin, daughter in law, Sol Martin, daughter Deidra Martin and a host of family members and friends. Cathy was proceeded in death by her father and mother, Oscar Lyons and Mattie Carter – Jacques, sister Maxine Allen, and brothers Joseph Brewster and Kyle Mitchell. Visitation to be held October 30, at 9 AM MST with Funeral Service beginning at 11 AM MST at Shiloh Baptist Church, 3201 Frutas Ave, El Paso, TX 79905. Interment to follow at 12:30 PM MST at Evergreen Cemetery East, 1400 Montana Ave, El Paso, TX 79938. Dignified, Professional and Personalized Service for the Martin family provided by Ricardo Martin and Deja Probasco-Graham of Sunset Funeral Homes- East, 750 N. Carolina Dr., El Paso Texas 79915. Please visit online registry at sunsetfuneralhomes.net.

Proverbs 31:31: "Honor her for all that her hands have done, and let her works bring her praise at the city gate&#8221; Cathy H. Martin was born September 5, 1933 in Dallas, Texas and departed on October 18, 2021 in Renton, Washington. Cathy... View Obituary & Service Information

The family of Cathy H. Martin created this Life Tributes page to make it easy to share your memories.

Send flowers to the Martin family.