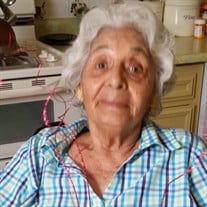 “This is my fight song, take back my life song, prove I’m alright song, …‘cause I’ve still got a lot of fight left in me…” Rachel Platten 2014 Our mother, Celia Sanchez Bruns, passed away in El Paso, Texas, at age 84, Thursday, Oct 21st, in the comfort of her own home, surrounded by three of her children. Today, we celebrate her life on this earth. She was born in Alpine, Texas, May 21, 1937, to Francisco (Tata) and Reyes Sanchez. Celia was the first of 8 children: Francisco “Pancho” (Hortencia) Sanchez (Odessa), Marin (Frances) Sanchez of Eagle Pass, Texas, Luis (Faye) Sanchez, (Odessa), Ernesto Sanchez (Alpine), Baby Consuelo Sanchez, (Alpine) Eddie (Joanne) Sanchez, Monahans, Texas, and Ruben Sanchez, (Odessa). All were born in Alpine and, except for Marin and Eddie, have preceded her in death. Our mother attended Centennial School in Alpine as a young girl, and then went on to Alpine High School. At that time, she had to walk by the Bruns Family Grocery store, twice a day. Needless to say, she fell in love with the owner’s son, Pete, and would later marry him, before he joined the United Stated Air Force. In the meantime, she was one of the lucky few to see a young performer, Elvis Presly, who was performing in the high school gym in the early 1950’s. In later years, she got to see a few actors that were in town filming the movie Giant: Elizabeth Taylor, Rock Hudson, and James Dean, on the streets of Marfa, Alpine, and in the local grocery store. In 1955, she became our own movie star, as she was crowned Miss VFW Queen in Alpine (pictured above). After his tour of duty was over with the United States Air Force, our father graduated from Sul Ross State University, and my parents moved their young family to Socorro, New Mexico. After a few months of life in Socorro, they would move to El Paso, where they could be closer to their families in Alpine. I know my mother had a big hand in making that decision! In El Paso, my mother went to work for El Paso Independent School District in the early 1970’s as a Baker, Cook, and Assistant Cafeteria Manager. She started as a substitute cafeteria worker at Rusk Elementary, Bassett Middle, and Austin High School. She fed thousands, upon thousands, of students, faculty, and staff, at these schools, as well as Bowie High School, Coldwell, Wiggs, and Lamar, where she spent the greater part of her 29-year career. It was a labor of love, and it was her passion, as she was born to be in the kitchen, always, baking, and cooking, not just for her students at school, but for her family at home. She passed on her cooking and baking skills to us, her children: skillet bread in a Dutch oven, which she learned from her father, a true chuck-wagon cook in the ranches of Alpine, Marfa, and the Big Bend, biscochos for Christmas, Lemon-meringue pies, home-made tortillas, and frijoles con asaderos, calabazitas con asaderos, and chile con asaderos. When we went on our Sunday drives to the Licon Dairy in San Eli, we knew we were going to feast that day. It is only fitting that this was one of her last meals with her family before her passing this week. She was married to our father, Pete Bruns, Sr., for 63 years, until his death in July 2020. They had five children including Armando Bruns (deceased), Pete Bruns Jr. (Alpine), Richard Bruns, Brenda Bruns, and Sandra (Victor) Bruns-Jimenez of El Paso. Grandchildren include 1st Sergeant Mark Anthony Bruns (Nicki), United States Army, Samantha Jimenez, Matthew Jimenez, and Peter Walter Bruns III, and several great-grandchildren. She leaves behind numerous nieces and nephews in the Hernandez, Lopez, Bermudez, and Sanchez families. She is also survived by her Tia Lola Fierro of El Paso. And finally, not to be left out, are her beloved family pets, and constant companions, until the end, Molly, Gatita, and Xochi. Our mother, Celia Sanchez Bruns, was a survivor and fighter. These last five and a half years were testament to that fighting spirit. After being told she would never be able to walk again, she devoted herself to her physical therapy, re-building her strength and walking again, leaving many in disbelief at her strength, determination, and will to succeed, up until the very end. “I have fought the good fight, I have finished the race, I have kept the faith…” 2 Timothy 4:7 Funeral Arrangements include: Vigil (2:00 p.m.), Rosary (3:00 p.m.), and Funeral Mass (4:00 p.m.) at Our Lady of Assumption Catholic Church, 4800 Byron Street, on Monday, November 1st. A mass will be held at Our Lady of Peace Catholic Church in Alpine, on Tuesday, November 2nd, at 10:00 a.m. (9:00 a.m. El Paso Time), with Burial to follow at 11:00 a.m. in the Bruns Family plot at Holy Angels Cemetery. Our mother, Celia, will be laid to rest next to our father, Pete. Together Forever. May God’s perpetual light shine upon her. May she rest in peace. Funeral arrangements by Sunset Funeral Homes – Northeast. 915.755.4494. Services will be live-streamed at www.sunsetfuneralhomes.net.

The family of Celia Sanchez Bruns created this Life Tributes page to make it easy to share your memories.

“This is my fight song, take back my life song, prove I’m alright...