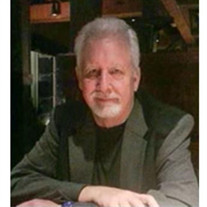 CW3 (Ret.) Charles “Chuck” Edgar Hutchins, age 70, entered into eternal rest on Tuesday, December 14, 2021 in El Paso, Texas. Chuck was a great husband to his wife Lupe for 44 years and would do anything for her. He was a great father who taught his children to be confident - to have a strong hand shake and make eye contact. He was always a fan of the underdog. He loved his 9 grandchildren and wanted nothing more than their happiness. Chuck had an undeniable presence; he was the epitome of the Cowboy who stood out in a crowd. He was well liked and made friends easily. Chuck proudly served in the U.S. Army (Hawk/Patriot) for over 20 years, and after retirement, served an additional 20 years for Raytheon Corporation, where he made a host of friends that continued until the end. He is survived by his beautiful wife; Guadalupe Evangelina Hutchins, his children; Charles Hutchins Jr. (Julie), Stephanie Hutchins (James Howard), Paul Hutchins, Bradley Hutchins (Nikki), and Jennifer Hutchins (Jake Lowe), and his beloved grandchildren; Savannah Howard, Trista Hutchins, Mallory Hutchins, Briseis Hutchins, Leah Hutchins, Addy Hutchins, Ivy Hutchins, Brad Hutchins Jr., and Killian Lowe. He is also survived by his childhood and lifelong friend, Mike “Tiny” Cutler, his loyal pets (Satie, Cookie, and Kitty), and many extended friends and family to cherish and honor his memory. A Visitation will be held Tuesday, December 21, 2021 from 5:00 pm to 8:00 pm, with a Holy Rosary at 7:00 pm at Sunset Funeral Home- West. The Funeral Service will be held Wednesday, December 22, 2021 at 9:30 am at Queen of Peace Catholic Church, 1551 Belvidere St., with an Interment to follow at 11:30 am at Fort Bliss National Cemetery. Those who cannot attend in person may join the funeral and memorial services virtually on Face book Live at https://www.facebook.com/sunsetfuneralhome(no account is needed). Services are entrusted to Sunset Funeral Home-West, 480 N. Resler Dr.

The family of Charles "Chuck" Hutchins created this Life Tributes page to make it easy to share your memories.

Send flowers to the Hutchins family.