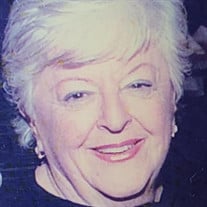 Dorothy "Dotty" Grodin passed away peacefully at home surrounded by her family on Thursday, October 21, 2021 at the age of 92. She was a loving wife, mother, grandmother, great grandmother and will be greatly missed. She was preceded by her beloved husband Irwin Grodin of 60 years and her beloved siblings, Harris Kaplan and Ann Seif. She is survived by her loving children; Jerrold Grodin (Julee), Sandy Grodin (Judy), Richie Grodin (Leslie), Lynette Brown (Don), Daniel Grodin (Maxine), Naomi McCown (Conner), her loving sister Frieda Mazer. She is also survived by her 17 beloved grandchildren; Darin Spelber, Shoshana Zidell, and Gabbe (Grodin), Joshua, Aaron, and Jeremy Grodin, Justin, Jared, Micah, and Shane Grodin, Seth and Sam Brown, Elyce Elalouf, Kaylee and Jacob Grodin, Jonah and Abbey McCown, and 16 great-grandchildren. Born to Polish immigrants in Mexico, she immigrated to El Paso at the age of five and lived there her whole life. She graduated from El Paso High School and attended the University of Tennessee. She met the love of her life on a blind date. He was a World War II veteran attending the Texas College of Mines. After marrying in 1946, they moved to his home in Brooklyn, NY, where they began their family. In 1953 they returned to El Paso, their forever home. Dorothy’s career as a social worker for the Texas Department of Human Resources extended for more than 20 years. She retired and volunteered for various organizations in the El Paso area, and was most proud of her service as a docent at the El Paso Holocaust Museum. She had many passions, with baking coming only second to her family. She had a talent for communicating with people. Her infectious smile and love of family were a center point of her life. She will be sorely missed. The funeral service will be held on Sunday, October 24, 2021 at 11:00AM at B’nai Zion Cemetery, 3915 Gateway West. In lieu of flowers, memorial contributions may be made to Congregation B’nai Zion, 805 Cherry Hill Lane, El Paso, TX 79912 or Envision Hospice, 8929 Viscount Blvd. El Paso, TX 79925. Services entrusted to Sunset Funeral Home-West.

Dorothy "Dotty" Grodin passed away peacefully at home surrounded by her family on Thursday, October 21, 2021 at the age of 92. She was a loving wife, mother, grandmother, great grandmother and will be greatly missed. She was preceded by her... View Obituary & Service Information

The family of Dorothy "Dotty" Grodin created this Life Tributes page to make it easy to share your memories.

Send flowers to the Grodin family.