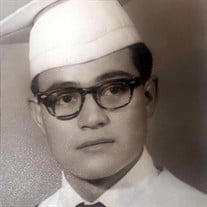 Enrique B. Valadez passed away on Friday, October 29, 2021. Early Life Enrique was born in Aguascalintes, Mexico on June 1, 1947. He graduated from El Paso Technical High School in the top ten% of his class. Then left to serve his country proudly... View Obituary & Service Information

The family of Enrique B. Valadez created this Life Tributes page to make it easy to share your memories.

Send flowers to the Valadez family.