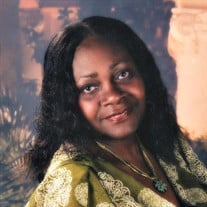 In loving Memory Felicia Yvette Garrett “Sunshine” October 25, 1954-December 18, 2020 Felicia Yvette Garrett, 66, went to be with the Lord on Friday, December 18, 2020. Felicia was born on October 25, 1954 in Miami, Florida to Minnie Lee Gallagher and Jose Crawford Sr. She was a graduate of Northwestern High School in Miami, Florida. She joined the United States Army as one of the original members of the Women Army Corps. She later took the career path as a distinguished police officer in Opa-Locka,Fl in 1980. She re-joined the military in 1988 and served in Desert Storm out of Mannheim, Germany; finally finishing off her career as a DOD police officer at Redstone Arsenal in Huntsville, Al where she retired. She relocated back to North Lauderdale, Fl to be closer to her sisters in 2004 where she volunteered as a community peace officer. She was very family oriented and loved the Lord. She dedicated her life to the Lord at the young age of 10 at Mt. Aaron Missionary Baptist Church. She was an avid cruiser that has been to over 60 countries within the last 5 years. She loved bingo and was well known within the community for her bright smile and amazing personality, hence the nickname “Sunshine”. Her hobbies included everything from fishing to collecting bells, dolls and coins. In 2018, she decided to move to El Paso, Texas to be closer to her children and planted her roots here. She was an active member of Life Church. Felicia is survived by her children, Antwannette Whitner, Tammy Sexton and David Sexton; her siblings, Yvonne Gallagher, Diane Noel, Lue Williams and Jose Crawford Jr. She is also survived by her seven grandchildren; William Whitner IV, Alexis Williams, Tamias Sexton-Clark, Deshawn Sexton, Shamar Washington, Danette Thomas, Destiny Sexton and two great-grandchildren. She was an amazing mother, sister, aunt and friend. To have known her, was to love her. She never met a stranger. She will be dearly missed.

The family of Felicia Yvette Garrett created this Life Tributes page to make it easy to share your memories.

Send flowers to the Garrett family.