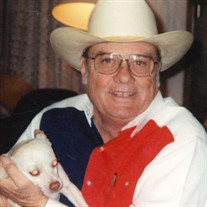 Gerald Don LaFoe, 81, passed away on Monday, October 18, 2021. Gerry was born April 15, 1940 in Davis, OK. He graduated from Austin High School in El Paso, TX, and then left to proudly serve his country in the United States Navy. Gerry would later marry the love of his life in July of 1960, Barbara. After his service in the Navy, Gerry went on to work at the John Deere Dealership in Fabens, TX, which he eventually came to own, providing agriculture equipment to the Lower Valley until his retirement. In his younger years, Gerry was a member of the Fabens Lion's Club, then went on to become a 32nd Degree Scottish Rite Mason, and eventually became District Deputy Grandmaster, a member of the El Maida Shrine Temple, and the Royal Order of Jesters. He was a long-time member of the Fabens Independent School District School Board. His favorite hobby was woodworking. He spent many hours in his woodshop crafting beautiful furniture, and other items for his family and friends. As a loving husband, father, grandfather, great-grandfather, brother, uncle, and friend, Gerry will be greatly missed. Gerry is preceded in death by his father; Everett Webb, parents; Eddie and Dorothy LaFoe, granddaughter; Autumn Faith LaFoe, and wife; Barbara LaFoe. He leaves behind his 3 sons; David, Michael, and Kenneth LaFoe and wife Rocio, daughter; Melissa LaFoe and wife Becky, 10 grandchildren, Kira, Stephanie, Brittany, Nicholas, Jeremy, Cassidy, Lacey, Kelsey, Chole, and Cash, 7 great-grandchildren; Hayden, Kellan, Adeline, Rowan, Kahlan, Marin, and Isla, and brother; Larry LaFoe and wife Jody. Graveside service will be held at 9:30 AM, Thursday, October 28, 2021 with Military Honors at Fort Bliss National Cemetery, 5200 Fred Wilson Ave. In lieu of flowers, memorial contributions may be made to any of the following organizations that Gerry supported; Shriners Children’s Hospital, St. Jude Children's Hospital, and Wounded Warriors.

Gerald Don LaFoe, 81, passed away on Monday, October 18, 2021. Gerry was born April 15, 1940 in Davis, OK. He graduated from Austin High School in El Paso, TX, and then left to proudly serve his country in the United States Navy. Gerry would... View Obituary & Service Information

The family of Gerald Don LaFoe created this Life Tributes page to make it easy to share your memories.

Send flowers to the LaFoe family.