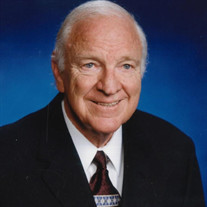 Harrell Lee Holder, 89, passed away in El Paso, Texas on September 16, 2021. He was born on his grandfather’s farm near Scranton, Texas on February 4, 1932. A funeral and graveside service will be held in El Paso and Fort Bliss Cemetery on October 1, 2021. He was a lifelong Baptist. Mr. Holder was a dedicated educator. He was a mathematics teacher, coach, principal and superintendent. Retiring from education at age 75 he was the longest serving superintendent in the US, with 44 consecutive years. He continued working for six more years as an education consultant for Three Rivers Education Foundation. He served as superintendent in the Three Way ISD (Maple, TX), Southside ISD (San Antonio, TX), Bishop CISD (TX), Hereford ISD (TX), Anthony ISD (TX), Cobre Consolidated ISD (Bayard, NM), and Pecos ISD (NM). He also served as an adjunct faculty member at several colleges and universities. Harrell graduated from Stanton High School in 1949. He then received a BA degree from Texas Tech, a M.Ed. from Texas Tech and an Ed.D. from Nova Southeastern University in Ft. Lauderdale, FL. During the Korean Conflict, he served in the army on the Armed Forces Special Weapons Project as an atomic weapons electrical specialist. Dr. Holder saw and experienced much in his lifetime. He was born during The Great Depression and learned at a young age the importance of being wise with money. He applied this knowledge to every school district for which he worked and was able to help these districts become financially solvent. Harrell’s first job was as a newspaper delivery boy followed by a grocery bagger. These jobs taught him a strong work ethic that he practiced throughout his life. Harrell enjoyed traveling and spending time at his cabin and ranch where he could relax and observe the great outdoors. When indoors, he enjoyed watching western movies and cheering on his favorite sports teams; the Houston Astros and the Texas Rangers. Harrell had an appreciation for music. He knew how to play many instruments by ear including the piano, trumpet, and guitar. He also enjoyed country, waltz, and Latin dancing. Harrell was a wonderful husband, father, and grandfather. He loved to spend time with his family and was proud of their many accomplishments. Harrell was a friend to all and welcomed visiting with anyone that called or came into his office. He is survived by his wife Dr. Adela Holder of El Paso, TX, his five children, Robert Holder (Julia) of Katy, TX, Bart Holder (Anna) of Waxahachie, TX, Ingrid Holder Ahlstrom (Marc) of Gilbert AZ, Jad Holder (Zulema) of Mesa, AZ, and Yamel Holder Knowles (Brady) of Logan, UT, his sister Donna Kayser of Artesia, NM, and 18 grandchildren. He was preceded in death by his parents Truett and Ruth Sprawls Holder and his grandparents Richard and Carrie Black Holder and Drew and Verda Ledbetter Sprawls. Visitation will be from 11:00 AM - 12:30 PM, on Friday, October 1, 2021 at Sunset Funeral Homes- Northeast, 4631 Hondo Pass. Funeral Service will take place at 12:30 PM, on Friday, October 1, 2021 at Sunset Funeral Homes- Northeast, 4631 Hondo Pass. Committal Service will follow at 2:00 PM at Fort Bliss National Cemetery.

Harrell Lee Holder, 89, passed away in El Paso, Texas on September 16, 2021. He was born on his grandfather&#8217;s farm near Scranton, Texas on February 4, 1932. A funeral and graveside service will be held in El Paso and Fort Bliss Cemetery... View Obituary & Service Information

The family of Harrell Lee Holder created this Life Tributes page to make it easy to share your memories.

Send flowers to the Holder family.