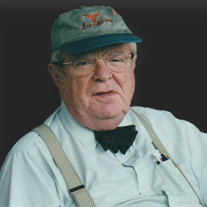 Henry Paul Giessel, age 94, passed away on Thursday, December 16, 2021 in El Paso, Texas. He was a wonderful husband, father, son, brother, grandfather and great-grandfather and will be greatly missed. He emigrated with his family in the 1930’s from Germany to Eagle Lake, Texas. He served in World War II in the United States Army. The son and brother of physicians, he chose to enter Law, graduating from the University of Texas Law School. He met and married his future wife, Alice Matthews, at the University of Texas. They raised 5 children in Houston, Texas and were blessed with many grandchildren and great-grandchildren. He was a legend in the legal field where he practiced in Houston for over 60 years. Henry is preceded in death by his parents; Julius Giessel and Charlotte (Lotta), his wife Alice Giessel, his son; Bruce Giessel, his daughter; Janet Townsley, and his brother; William Giessel. He is survived by his children and their spouses; Glenn Giessel (Kathy), David Giessel (Lorrie), and Linda King (Joel). He is also survived by many friends and family who cherish and honor his memory. Visitation will be held Tuesday, December 28, 2021 from 6:00pm to 8:00pm with a Eulogy at 6:30pm at Sunset Funeral Home- West, El Paso, Texas. A Graveside service with military honors will be held Wednesday, December 29, 2021 at 9:30am at Fort Bliss National Cemetery, 5200 Fred Wilson Ave. In lieu of flowers, donations to the American Cancer Society are requested. Services are entrusted to Sunset Funeral Home-West, 480 N. Resler Dr, El Paso, Texas. Those who cannot attend in person may join the funeral and memorial services virtually on Face book Live at https://www.facebook.com/sunsetfuneralhome/ (no account is needed).

Henry Paul Giessel, age 94, passed away on Thursday, December 16, 2021 in El Paso, Texas. He was a wonderful husband, father, son, brother, grandfather and great-grandfather and will be greatly missed. He emigrated with his family in the 1930&#8217;s... View Obituary & Service Information

The family of Henry Paul Giessel created this Life Tributes page to make it easy to share your memories.

Send flowers to the Giessel family.