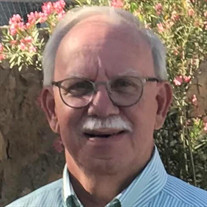 Bruce Brubaker, 70, of Santa Teresa, New Mexico, gently passed away at home, surrounded by his loving family on May 27, 2021. Howard Bruce Brubaker was born on October 21, 1950 in Council Bluffs, Iowa, to Charles and Helena Brubaker. Bruce grew up in Carson, Iowa, where he delivered newspapers, played baseball, and met his future wife, Tracy Husz. After graduating from Carson-Macedonia High School in 1968, he attended Northwest Missouri State University in Maryville, Missouri. Bruce married Tracy on April 3, 1971, and following in his brother’s footsteps, worked as a banker in various parts of Iowa. He and Tracy had two daughters, Andrea (Andee) and Allison. Bruce was a loving father who enjoyed coaching his daughters’ softball teams, introducing them to his favorite music and taking them on wacky family vacations. Even as a busy family man, Bruce always found time to support the University of Iowa Hawkeyes and participate in numerous fantasy sports leagues (a 30-year hobby). After 25 years in banking in the Midwest, Bruce received the opportunity to move to El Paso, Texas, to be a part of the opening of the new casino at Sunland Park Racetrack & Casino. Bruce enjoyed being the HR Director there, where he liked the work and loved the people. He and Tracy made a home in Santa Teresa and enjoyed living in the southwest for 23 years. In the last 20 years, Bruce fulfilled a role that would be his favorite, grandfather. His grandchildren brought him unending joy. He had the time of his life visiting Disneyland and taking them to Spring Training in Arizona many times. While he supported and emphasized their academic pursuits, he also believed in a balanced life, and both grandkids could play poker by the age of five. After retiring in 2013, Bruce continued to serve on the Board of Directors for OneSource Federal Credit Union, worked as an usher during the inaugural season of the El Paso Chihuahuas baseball team and played music with his friend, Dan Lambert. Oh, and he watched his beloved Kansas City Royals win the World Series. Bruce loved his family and friends and regaled them with many a story, some fact, some fiction (Google really hurt him). He loved to laugh and always led with kindness. His philosophy of life is summed up by a quote from one of his heroes, Yogi Berra, “Love is the most important thing in the world, but baseball is pretty good, too.” Bruce was preceded in death by his parents, his brother, Darrell Brubaker, his sister, Carol Mead, and his father-in-law, Larry Husz. He is survived by his wife, best friend and dance partner of 50 years, Tracy Brubaker; daughters, Andrea Brubaker and her husband, Ruben Arana, of El Paso, and Allison Gano and her husband, Cory, of El Paso; two wonderful grandchildren, Griffin and Grace Gano; his mother-in-law, Pauline Husz of Macedonia, IA; many cherished nieces, nephews, sisters-in-law and brothers-in-law; and treasured friends, old and new. Services will be held at Sunset Funeral Home West, 480 N. Resler Dr., El Paso, TX, on Thursday, June 10 at 6:30pm. In lieu of flowers, please consider a donation to Mesilla Valley Hospice or the Santa Teresa Volunteer Fire Department. An additional celebration of life will take place in Bruce's hometown of Carson, IA, at the Carson Community Center on Thursday, June 24, at 6:30pm.

Bruce Brubaker, 70, of Santa Teresa, New Mexico, gently passed away at home, surrounded by his loving family on May 27, 2021. Howard Bruce Brubaker was born on October 21, 1950 in Council Bluffs, Iowa, to Charles and Helena Brubaker. Bruce... View Obituary & Service Information

The family of Howard Bruce Brubaker created this Life Tributes page to make it easy to share your memories.

Send flowers to the Brubaker family.