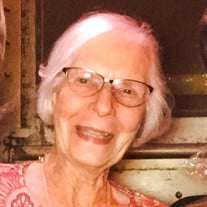 Joanne Windberg Cannon, 87, died on Monday, December 20, 2021, at her home in the care of her family. Her death has surprised many in her lively senior community, where a short time ago she was buzzing deftly around on her electric scooter to compete in bridge games and volunteer at the library. Joanne had lived independently since 1993, when her beloved husband Thomas Edward Cannon died at home in her care. To their surviving children, Chuck, Mike, and Kathy, she was their forbearing “Mom.” To her surviving sister, Mary Kay Vela, and sister-in-law, Linda Cannon, she was known simply as “Jo.” And since 1993 when her daughter married, she was known to her son-in-law Scott Berk and her newly embraced extended family as “JoMom.” She is also survived by Vela nephews and nieces Bryan, Tim, Jennifer, and Lisa, and by Cannon nieces Malinda and Emily, as well as by her four great-nieces and three great-nephews, whose news was always of great interest to her. Born in El Paso, Texas on April 3rd, 1934, Joanne was a third-generation native of the US-Mexico borderlands. Community service was greatly valued by her mother Hazel (née Goddard), a nurse and women’s charities leader, and her father, Justice of the Peace, Judge Charles Windberg, Jr. She energetically upheld their legacy both in her long career in public education and in her volunteer efforts in retirement. While still Miss Windberg, she completed her baccalaureate studies at Mills College (1956) and received her M.Sc. in child development from the University of Texas at Austin. At every stage of education she received honors—most special was the Ima Hogg Graduate Scholarship in Home Economics, which came with a lovely hand-written note of encouragement from benefactor Ima Hogg herself. Jo’s kindness and sweet nature will be remarked upon often by all those who cherished her. While she was exceedingly modest about her intellectual abilities, her intelligence and quick memory for facts was the stuff of family legend. Guileless and ever charitable, she was a faithful Catholic who readily asked for and offered forgiveness. She was eager to be included in social events and showed up with a sparkly smile and easy laughter. On Wednesday, December 29, 2021, her services will begin at Sunset Funeral Home East, 750 N. Carolina Dr., El Paso, Texas with a visitation at 9:30 am followed by the recital of the Holy Rosary starting at 10:30 am. At 12 noon, of the same day, her funeral mass will be held at St Stephen Deacon & Martyr Church, 1700 George Dieter Drive, El Paso, Texas. A private interment will follow at Our Lady of Mount Carmel Cemetery. In the new year Joanne’s family will return to the Austin area for a celebration of her life at St Catherine of Siena. Please reach out to Kathy for details. In lieu of flowers, and in honor of the example she set in caring for her own elderly relatives in El Paso, please consider mailing a holiday season donation in the name of Joanne Windberg Cannon to the United Way of El Paso County – Senior Fund, PO Box 1707, El Paso, 79949. Ask Kathy for online donation details.

Joanne Windberg Cannon, 87, died on Monday, December 20, 2021, at her home in the care of her family. Her death has surprised many in her lively senior community, where a short time ago she was buzzing deftly around on her electric scooter to... View Obituary & Service Information

The family of Joanne Windberg Cannon created this Life Tributes page to make it easy to share your memories.

Send flowers to the Cannon family.