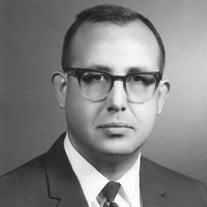 Our father Joe P. Piñón, Jr., "Tuni," was a man with a social conscience who was guided by Jesus Christ and motivated by social justice. He owned Bank Pharmacy and dedicated his life as a practicing pharmacist from 1953 to 2018. He entered eternal life on August 8, 2021. His entire life he had a special love for children and the environment and used his professional knowledge to advocate for communities in El Paso and Juarez. In addition to his wife Angelina E. Piñón, he is survived by his sister, Mary Lou Lara of Flower Mound, Texas; sons Perry Piñón, Dr. Ivan Piñón (Suzanne) of Albuquerque, New Mexico, Gilbert Piñón (Dana) of Santa Fe, New Mexico, and only daughter, Yvonne Piñón; grandchildren Paul Piñón, Carissa Piñón, Maya Piñón, Jacqueline Piñón, and Sean Piñón. He was pre-deceased by his parents, Concepcion Jurado Piñón and Jose Piñón Sr.; brother, Alfredo Piñón; and daughter-in-law Irma Sierra Piñón. Born on August 1, 1931, our father was a scholarly man who mentored many young people to pursue education beyond the high school level. He was a graduate of Cathedral High School and the University of Texas at Austin College of Pharmacy, earning his pharmacy degree at the young age of 20. He highly valued education and worked to ensure that others also had the opportunity to pursue higher education. In 1971, he was installed as the chairman of the Ruben Salazar Memorial Scholarship Foundation. He was tasked with helping young Mexican Americans who desired to enter the mass communication field as writers and journalists. A year later he was moved to run for a school board position for the El Paso Independent School District. He ran on the belief that it is the board's responsibility to have an open and free discussion with teachers about the educational problems that exist in the classroom. He was a staunch environmentalist who recognized that protecting the environment was critical to being a responsible health care provider and safeguarding children's futures. His environmental work began as early as the 1950s. In 1958 he became the President of the El Paso Pharmaceutical Association. This is when his pharmacology studies led him to pursue the relationship between health and the environment. In 1958 he helped bring a poison control center to El Paso, the first in Texas. His interest was not only the poisons that children might take accidently, but the poisons such as lead, arsenic, and cadmium that the American Smelting and Refining Company (ASARCO) emitted by the ton into El Paso and Juarez. He was concerned about the effects of lead on the cognitive development of children on both sides of the border. In 1971 he wrote an article for Ecology Today about the political and socio-economic aspects of air pollution in El Paso out of frustration that the community was not interested in investigating the connection between Asarco and poisons. He was most recognized in 1992 when he became the only El Pasoan to contest Asarco's permit application to expand their production of pollutants. In 2001 he served on Mayor Raymond Caballero's Environmental Advisory Committee, specifically the Asarco subcommittee. Asarco applied for a renewal permit. For the first time in El Paso's history public opinion completely turned around and Asarco encountered opposition from city and state officials, scientists, environmental groups and federal regulators. We find solace that our father lived to see Asarco’s two smokestacks demolished in 2013. In 1997 after bidding for a city contract to become a first time pharmacy provider to serve the poor, he was awarded the provider contract. He quickly discovered that drug therapies in the past had been improperly administered. He conducted research regarding the advanced preparation of mono and poly-suspensions used for the treatment of tuberculosis in children. Previously, tuberculosis drugs in suspension were being prepared ahead of time and he knew that the shelf life of these drugs waned in time and were ineffective in the fight of tuberculosis. He advised that tuberculosis drug therapies must be prepared at the time they are administered. His concern was that if tuberculosis drugs are not given in their full and proper doses, the tuberculosis bacteria not only survives, but also mutates into forms resistant to one or more of the drugs used to fight tuberculosis. In 1997 he was recognized by the El Paso City-County Health and Environmental District Preventive Health Services Division with an award plaque for his dedication to improving public health efforts in the community. His methodology also resulted in a savings to the taxpayers of El Paso. Former Executive Director of Our Lady's Youth Center, the late Fr. Rick Thomas, and the work of his dedicated volunteers, propelled our father to become an instrument for God's people in Juarez. He helped set up and stock their pharmacy for the medical clinic (The Lord's Clinic) ministry that continues to serve the poor in Juarez every Tuesday. He was honored to know and work with the volunteers of Our Lady's Youth Center, who he found to be dedicated servants to God's word. He had a strong commitment to The Lord's Clinic. His charity work with this organization was meaningful to him, because he felt closer to God when he was His servant. Our father's social justice efforts and his charity work gave us a positive worldview that there will always be a need to strive for social equality. His efforts fill his grandchildren with pride. To honor our father's extremely high health and medical standards during the COVID-19 pandemic, a private funeral mass was celebrated with only the immediate family in attendance, and the Sisters of Perpetual Adoration, whom he dearly loved and respected for their devotion to Our Blessed Mother. He was not only their pharmacist, but their benefactor for their prescription needs from 1960 to 2018. Donations in memory of Joe P. Piñón Jr., can be mailed to: Sisters of Perpetual Adoration Christ the King Monastery, 145 North Cotton Street, EI Paso, Texas 79907.

Our father Joe P. Piñón, Jr., "Tuni," was a man with a social conscience who was guided by Jesus Christ and motivated by social justice. He owned Bank Pharmacy and dedicated his life as a practicing pharmacist from 1953 to 2018. He entered eternal... View Obituary & Service Information

The family of Joe P. Piñón Jr. created this Life Tributes page to make it easy to share your memories.

Send flowers to the Piñón family.