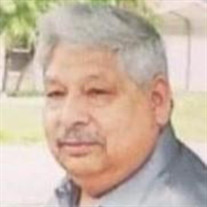 John Robert Becerra, 75, passed away at his home in El Paso, Texas on October 14, 2021. He is survived by his wife of 50 years Alicia Franco Becerra and his five children, John A. Becerra, Claudia Veronica Lozano, David Becerra, Vanessa Gisell Becerra, and April Iris Gonzalez: his grandchildren Eric Christopher Lozano, Daniel Rene Lozano, Kara Janelle Liane Becerra, Joshua Becerra, Giselle Nicole Betancourt, Shjon Bryan Becerra, Madison Emily Rae Becerra, Samantha Rose Becerra, Katelyn Danielle Gonzalez, Tristin Alexander Lopez, and Eva Ariel Becerra and his great-grandchild Adrianna Cali Lozano, his brother Jose Tereso Becerra and his sister Lupe Becerra. He was born in San Luis De La Paz, Mexico on June 23, 1946 and was raised in Elgin, IL with his parents Jeremias Becerra and Baleria Salazar Becerra and siblings Francisco, Jose Luis, Maria, Lupe, Jose Tereso, and Pertetuo Becerra. He was served with the Army in the Vietnam War, he then came home to marry his lifelong partner Alicia Becerra in 1971 and made the rest of their life in El Paso, Texas. He was a hard-working man who worked to the very last day with United States Postal Service and never having the privilege of enjoying his retirement. He was a man of few words, his passion for family was non-surpassed and his love, care, and respect spoke volumes. Those who had the wonderful opportunity to meet him felt his genuine compassion and love. He will be forever be remembered as a kind, decent, giving husband, as well as a loving father and devoted grandfather. Funeral Services will be held on Wednesday, October 27, 2021 with Visitation will start at 5:00 PM, with Rosary at 6:00 PM at Sunset Funeral Homes- Northeast, 4631 Hondo Pass. Scripture Mass will be held on Thursday, October 28, 2021 at 11:30 AM at Sunset Funeral Homes- Northeast, 4631 Hondo Pass. Interment will follow at 2:00 PM at Fort Bliss National Cemetery at 5200 Fred Wilson.

John Robert Becerra, 75, passed away at his home in El Paso, Texas on October 14, 2021. He is survived by his wife of 50 years Alicia Franco Becerra and his five children, John A. Becerra, Claudia Veronica Lozano, David Becerra, Vanessa Gisell... View Obituary & Service Information

The family of John Robert Becerra created this Life Tributes page to make it easy to share your memories.

Send flowers to the Becerra family.