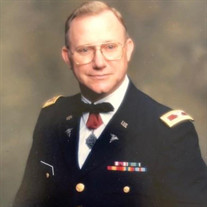 Colonel Joseph James Betasso (U.S. Army Ret) passed away on August 27, 2021 in Lubbock, Texas. Beloved son of Anthony and Agnes Betasso, his life was full in every respect. “Colonel Joe” is survived by his wife of 59 years, Sheila R. (Gahan) Betasso, their three children Angela Betasso (and her family in Dallas, TX), Rev. Patrick Betasso (Discalced Carmelite Friar in Washington, D.C.) and Elizabeth Tombs (and her family in Lubbock, TX), and by his sister Anne Brooks (of Beavercreek, OH), niece Judy Bayes (of Beavercreek, OH) and nephew Dan Sexauer (of Scottsdale, AZ). An energetic man, Joe was greatly loved by his five grandchildren and six great-grandchildren. Joe was a proud, patriotic, career military officer. He served 30 years in the Army Medical Service Corps as an optometrist, receiving multiple awards including the Meritorious Service Medal and one of the Army’s highest honors, The Legion of Merit. Joe is best described as a loving and dedicated husband, a man positively smitten by his wife, Sheila, from the first day he met her while examining her eyes at William Beaumont Army Medical Center in El Paso, TX, to his last day with her by his bedside. Joe and Sheila shared a passion for family, friends and travel. Over their 60 years together they visited 76 countries and 47 U.S. states. Joe was born October 30, 1936 in Lehigh, OK. His formative years were spent in Fairborn, OH, where his parents worked at Wright-Patterson Air Force Base. Upon graduating from The Ohio State (Go Buckeyes!) in 1961, he was commissioned as a Second Lieutenant in the U.S. Army. Joe’s first and last assignments were at Wm. Beaumont Army Medical Center in El Paso, with many moves in between – Korea; Ft. Leavenworth, KS; Ft. Eustis, VA; Ft. Sam Houston, TX; twice to Walter Reed Army Medical Center, Washington, D.C.; 2nd General Hospital, Landstuhl, Germany; Ft. Jackson, SC. Once retired from his military career, Joe and Sheila called El Paso their home for 29 years, where he continued to practice optometry including at the El Paso Veterans Administration. Three years ago they moved to Lubbock, to be closer to their daughter and family. Embodying a strong work ethic, Joe fully retired at the age of 75. Joe enjoyed playing golf, eating at favorite restaurants, visiting family, attending Holy Spirit Catholic Church in Lubbock, reading and going to “NRV” (no redeeming value) movies with friends. He had a knack for golf, topped off by achieving the elusive “hole in one” at Ft. Bliss’ Underwood golf course. An upbeat and interesting man, Joe was a life-long student and could carry a conversation with anyone on almost any topic or discipline. He penned a number of poems, short stories and guest lectured at various local clubs and organizations in El Paso. Joe, like his wife, believed that people are more important than things, and thoroughly enjoyed the company of their many, many friends; they were the consummate party hosts. He will be greatly missed by an army of family and devoted friends. In lieu of flowers, memorial contributions may be made to Holy Spirit Catholic Church (Prayer Garden Fund), 9821 Frankford Ave, Lubbock, TX, 79424; or the Discalced Carmelite Friars, 2131 Lincoln Rd. NE, Washington, D.C. 20002. Funeral Mass will take place at 11:30 AM, on Monday, September 27, 2021 at Sunset Funeral Homes- Northeast, 4631 Hondo Pass. Committal Service will take place at 1:00 PM on Monday, September 27, 2021 at Fort Bliss National Cemetery. Please visit online registry at www.sunsetfuneralhomes.net.

Colonel Joseph James Betasso (U.S. Army Ret) passed away on August 27, 2021 in Lubbock, Texas. Beloved son of Anthony and Agnes Betasso, his life was full in every respect. &#8220;Colonel Joe&#8221; is survived by his wife of 59 years, Sheila... View Obituary & Service Information

The family of Joseph James Betasso created this Life Tributes page to make it easy to share your memories.

Send flowers to the Betasso family.