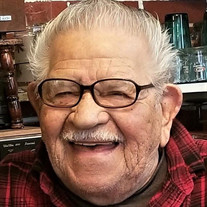 Margarito R. Esparza, age 96, of El Paso, Texas, passed away July 7, 2021, in his home in the company of his loving family. He was born in Long Beach, CA on July 10, 1924. During the depression he and his family migrated to Aguascalientes, Mexico. At an early age he worked at a bakery and shoe repair shop. At the young age of 19 he came back to the United States and served in the US Army from 1946-1948. There he worked in the kitchen and learned to read. He married Lorenza Flores on June 10, 1948 they were together for 62 years and had three children – Margarita, Juan Manuel & Ricardo. He worked at The Popular Dry Good Store for 47yrs, first as a male model then in the distribution center and bartender on weekends at various venues around the city. He enjoyed maintaining his home, reading the newspaper daily, and gardening. Margarito was also an artist who collected found objects turning them into a unique style of art known as outsider art. He would gift his art to others and decorate his home and garden with his work. Preceded in Death Parents- Pedro Sr and Felipa Esparza Siblings- Pedro Esparza, Ruperta Carrillo, Josephina Avelez, Pascual Esparza Wife - Lorena F. Esparza Sons - Juan Manuel Esparza and Ricardo Esparza Grandsons - Steve Borjon and Esai Esparza Survived by - Daughter Margarita Simenal Grandchildren and Great Grandchildren Jose Borjon, daughter Desirae Veronica Borjon, son Ginobili daughter Lourdes Ezar Esparza Eris Esparza, Sons Parker & Cooper Eron Esparza Gabriela Esparza Indra Esparza Worch, daughter Mila Erin Esparza Connon, son Jon Bear, daughters Isabella & Valentina Visitation will be held from 3:00 PM to 8:00 PM with a Rosary at 5:00 PM, Saturday July 17, 2021 at Sunset Funeral Homes-East, 750 N. Carolina. Funeral Mass will be held at 11:30 AM at St. Paul Apostle Catholic Church, 7424 Mimosa Ave. Interment to follow at Fort Bliss National Cemetery

Margarito R. Esparza, age 96, of El Paso, Texas, passed away July 7, 2021, in his home in the company of his loving family. He was born in Long Beach, CA on July 10, 1924. During the depression he and his family migrated to Aguascalientes,... View Obituary & Service Information

The family of Margarito R. Esparza created this Life Tributes page to make it easy to share your memories.

Send flowers to the Esparza family.