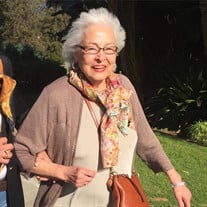 How have all the families in the world that have lost their mother been able to write an obituary? In one, final goodbye, how do families tell others how much they loved their mother, what she meant to them, who she was, what was important to her, how she lived and died, who loved her and will always love her, and who she left behind? For our mother, we don’t know how to incorporate in this writing all the good she did, her teachings that we will forever carry with us, and our thankfulness that she was our mother. We will most certainly fail at including everything, and we simply don’t know how to fully share what is in our hearts. But we do know this: we miss her. We miss her so deeply. Marian Mina Scheiner Azar died on Christmas Eve, 2021, at the age of 95 in the home she lived in for more than sixty years. She lived a full and wonderful life. Marian was born in Brooklyn, New York on September 13, 1926. She and her older brother, Harvey Scheiner, were raised there by her parents, Belle Fisher Scheiner and Louis Scheiner. Marian spent her summers at a camp in Maine, and she always smiled with sparkling eyes when she spoke about that youthful time in her life. She graduated from New Utrecht High School in Brooklyn at the age of sixteen because Marian was MENSA smart. She then attended Hunter college where she played basketball and earned a degree in English at New York University in NYC. After college, Marian went to work at Grey Advertising in Manhattan. Shortly after, she was compelled to move to El Paso, the Sun City. She had a skin condition and the “prescription” for healing was sunbathing in a hot, dry climate. It wasn’t long until a sun-kissed Marian began living and working in El Paso – once again in the advertising field. It was about this time that she met the love of her life, Edward Azar. Marian and Ed married June 12,1955 and resided in El Paso together for 59 years. She was an integral part of Ed’s life and helped him successfully build Azar Nut Company. They traveled the world extensively, entertained constantly, and loved their life together until Ed died in 2014. Marian and Ed had five children: Chana, Edie, Edward Jr., Gena, and Anthony. They had eight grandchildren: Robert (Beto), Andrew, Jack, Rachel, Jason, Luke, John, and Austin. Family was the main focus of Marian’s life and being a mother, grandmother, and wife was incredibly satisfying to her. She was also a true friend and guiding light to her sons-in-law, Bill Burton and John Skotchdopole, and her daughter-in-law, Paula (Scott) Azar. Marian loved to tend her gardens. She excelled at gardening and could make a stick grow. Her home housed pineapple, avocado, and banana plants, along with beautiful flowers and vines. She was also an exceptional cook, and always prepared food in abundance -- in case anyone dropped by at dinner time. During her 60’s Marian began painting, and many of her works hang in the homes of her children and friends. When she had time, Marian would complete any crossword puzzle that was handy, including her favorites from the New York Times. Our mother had no regrets about her life choices. She had deep faith and trust in God. She woke up happy, loved deeply, and cared fiercely. She spoke with clarity and had a most unique sense of humor. Marian was a gifted wordsmith; she was fun to have a conversation with because she had such a creative mind. You would never be able to predict her responses because she spoke with a flair and blatant honesty that was a Marian trademark. You could always count on her to tell you the truth and address the real issues at hand. Through the years we discovered that Mom was like a second mother to many people in her world. She was kind and accepting of others who may have felt alone or misunderstood, and she had an innate ability to embrace another person lovingly and compassionately, just as they were. There will never be another Marian. We are grateful beyond measure to have had her here to love, and be loved by her, as long as we did. She spread so much love and kindness. And isn’t that the most important thing to do on this earth? Marian Azar’s life was celebrated by her family in a private service at St. Francis Anglican Church and burial at Mt. Sinai Cemetery. Memorial contributions can be made to the El Paso Community Foundation, Marian Azar Fund, P.O. Box 272, El Paso, TX 79943, or online: epcf.org/marianazar Correspondence to the family can be mailed to The Azar Family, 123 W. Mills Ave, Suite 500, El Paso, Texas 79901.

How have all the families in the world that have lost their mother been able to write an obituary? In one, final goodbye, how do families tell others how much they loved their mother, what she meant to them, who she was, what was important... View Obituary & Service Information

The family of Marian Azar created this Life Tributes page to make it easy to share your memories.

How have all the families in the world that have lost their mother...

Send flowers to the Azar family.