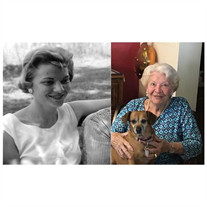 Marie Anne “Texas” Logan, loving wife and mother, passed away peacefully at home in El Paso, Texas from Alzheimer’s disease at the age of 86 on December 6, 2021. Marie was born in Malines, Belgium in 1935 to Armand and Josephine De Smidt. She lived through the blitzkrieg of Belgium in 1940, and at the age of 7, was captured along with her mother and held in Montluc Prison in German-occupied France. While awaiting transport to Auschwitz, she and her mother escaped and made their way to Switzerland. In Switzerland, they were first aided by the Red Cross, and then a family friend until the end of the war. They were subsequently reunited in Belgium with her father, a Belgian artillery officer, who later attained the rank of three-star general. Marie met her true love and future husband, Robert “BJ” Logan, while attending college in Paris. He was stationed at NATO with the U.S. Air Force. One of the courtship stories Marie told was that her father, who was also stationed at NATO, decided he would need to have this American interloper investigated before there would be any marriage. After a thorough review, the General was unable to find any fault with BJ or his family, and so Marie and BJ were married in Fontainebleau, France, where they later had two daughters. After the family moved to the states, Marie intermittently pursued various avocations including newspaper advertising, real estate and interior decorating. Marie never met a stranger, and loved maintaining a beautiful home and cooking wonderful meals for her family and friends. Not one to stay idle, Marie engaged in many hobbies throughout her life, including taking up tennis in her 40s. Being quite competitive, she attained the No. 1 tennis ranking in the state in the 45-and-over bracket. She was also proud to have attained her Gold Life Master in bridge. Other hobbies she conquered with full force included tole painting, Scrabble, cross-stitching and knitting. Her competitiveness was also wrought upon her children, whom she lovingly embarrassed by being vocally supportive of them at their various childhood competitions. Marie also wrangled her beloved BJ into some of her hobbies, including tennis, bridge and Scrabble which they enjoyed together for many years. Marie is survived by her husband, Robert (“BJ”); and her daughters Catherine and Elizabeth. The family wishes to thank Marie’s wonderful caretakers over the last several years: Cecilia Salinas, Maria Rodriguez, Yolanda Gonzalez and Giselle Gonzalez. They not only provided outstanding care for Marie, but were a source of great emotional support for the family.

The family of Marie Anne Logan created this Life Tributes page to make it easy to share your memories.

Send flowers to the Logan family.