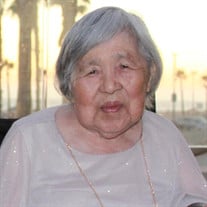 Michiko Brown was born on November 30, 1925, in Yokohama, Japan to Saburo and Suzu Toriumi. She was the oldest of four children: brothers Takashi and Katsunori, and sister Taeko. She quit school at 12 years old to care for her siblings after her mother passed away. After World War II, she met a soldier by the name of Henry Brown Jr. They fell in love and married in Yokohama in 1947. Their eldest son, Terry, was born in Japan, but just a few years later, on January 5, 1952, they set sail aboard the USS General William Mitchell and arrived in San Francisco, CA eleven days later. With Henry in the military, they moved around the country. Michiko gave birth to their first daughter, Marie, while stationed at Fort Lawton in Seattle, WA. Their next three children, Ida Brown, Henry Brown III, and Joe Brown, were born at Fort Lewis near Tacoma, WA. One of their next stops was at Fort Richardson in Anchorage, AK where their son, John, was born. The family was relocated to Ft. Monmouth, NJ and welcomed their next son, James. Henry and Michiko made one final move to Fort Bliss in El Paso, TX where they settled their growing family. Margaret, Herbert, and Theresa were all born at William Beaumont Army Medical Center. The Catholic faith was one of the pillars of the Brown family. They became a fixture at San Antonio de Padua Church. Henry was an usher and Michiko was a money counter. Having helped raise her younger siblings, Michiko was very family oriented. In addition to raising her own children, she helped care for some of her grandchildren as well. In 2000, Michiko moved to Tucson, AZ. One of her favorite hobbies was playing bingo. Michiko was a regular at Desert Diamond Casino, where she earned celebrity status and a new nickname, “Michi”. If someone was in her usual spot, they would be asked to move by other patrons. When any of her family joined her at bingo, they were introduced as “Michi’s son or daughter, or Michi’s grandchild”. She had many friends at Desert Diamond and was watched after by the workers in the bingo hall. On August 11, 2021, at the age of 95, Michi passed away in her sleep while surrounded by family. Each of her children were able to visit her in the days prior. She is survived by her 10 children, 21 grandchildren, and 17 great-grandchildren. Visitation will be from 4:00 PM to 8:00 PM with a Rosary at 6:00 PM, Wednesday, August 18, 2021 at Sunset Funeral Homes - East. Funeral Mass will be held at 11:30 AM, Thursday, August 19, 2021 at San Antonio Catholic Church, 503 Hunter. Interment will follow at 1:00 PM at Fort Bliss National Cemetery.

Michiko Brown was born on November 30, 1925, in Yokohama, Japan to Saburo and Suzu Toriumi. She was the oldest of four children: brothers Takashi and Katsunori, and sister Taeko. She quit school at 12 years old to care for her siblings after... View Obituary & Service Information

The family of Michiko Brown created this Life Tributes page to make it easy to share your memories.

Send flowers to the Brown family.