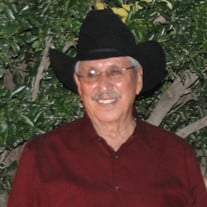 Mr. Ray Joseph Trujillo, 85, entered peacefully into the presence of His Savior surrounded by family members on Wednesday June 23, 2021. Son of the late Santiago and Emilia Trujillo, he was born May 14,1936 in a small farmhouse in Faywood, New Mexico in the Mimbres River valley. Orphaned at the age of 16, he braved the role of guardian to his younger siblings. He graduated from Deming High school in 1956 and enrolled in New Mexico State University until being drafted into the United States Army in 1959 as a field artillery specialist and operational intelligence specialist. After serving in the military, he began his career with the Texas Department of Transportation where he faithfully served as an Engineering specialist for the next 31 years. He retired in 1995 with honors and distinction. He subsequently attended the University of Texas at El Paso and received a Bachelor’s in Business Administration. He is survived by his loving wife Joyce Trujillo and children with former spouse and dear friend, Sally Trujillo. His children and grandchildren include son Ray Joseph Trujillo (Cathy), grandsons Rene Joseph Trujillo, Ryan James Trujillo (Michelle), great grandchildren Faizal John Andha, Khalid John Andha, Lucas John Andha, Ray Joseph Trujillo, Layla Rose Trujillo, son David James Trujillo (Carol), grandson Bryan Santiago Trujillo, granddaughter Hope Noelle Trujillo, daughter Yvonne Marie Maez (David), grandson Logan Thomas Maez, granddaughter Michaela Marie Maez, step-son Mark Franklin Babcock, and step-grandson Brandon Mark Babcock. He is survived by siblings Angie Chavez, Gloria Candelaria, Reyna Solano, and Rosie Baeza. Ray leaves behind many other friends and family members who will greatly miss his loyalty and love. Three of his best friends include: Raul Blanco, Patrick Garcia, and Emilio Magdaleno. He was always the first to show up with some sweet bread or call when life’s storms came in. He poured his love into the community serving different Catholic charities throughout his life. He served as treasurer for “Los Que Van Quedando” where he and his “compas” raised scholarship funds for students wanting to attend Cathedral High School. He also served as treasurer for El Paso Sobriety Allows for a Brighter Future raising funds for those seeking rehabilitation. His kindness, generosity, sense of humor, and lively spirit will always live on through his family and friends. Visitation will be from 5:30 PM to 8:00 PM with a Rosary at 6:30 PM, Monday, June 28, 2021 at Sunset Funeral Homes - East, 750 N. Carolina. Funeral Mass will be held at 9:45 AM, Tuesday June 29, 2021 at St. Pius X Church, 1050 N. Clark. Interment will follow at 11:00 AM at Fort Bliss National Cemetery. In lieu of flowers, contributions can be made to the Rio Grande Cancer foundation https://rgcf.org/. Streamed Services available at https://www.facebook.com/sunsetfuneralhome

Mr. Ray Joseph Trujillo, 85, entered peacefully into the presence of His Savior surrounded by family members on Wednesday June 23, 2021. Son of the late Santiago and Emilia Trujillo, he was born May 14,1936 in a small farmhouse in Faywood, New... View Obituary & Service Information

The family of Ray Joseph Trujillo created this Life Tributes page to make it easy to share your memories.

Send flowers to the Trujillo family.