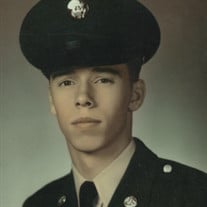 Roger D. Saldariaga, age 72, entered into eternal rest on Wednesday, October 6, 2021at Trans-Mountain Providence Hospital in El Paso, Texas. Roger had a most colorful life as a drafted soldier, college student, Mercedez-Benz salesman, hair stylist, actor and screen-play writer for the Hollywood film industry. His screenplays, although fictionalized, often addressed serious themes like the Vietnam war he experienced himself, the epidemic drug problems with youth in particular and interpersonal challenges within close relationships. For seventeen years or so, Roger courageously battled prostrate cancer with a determination to beat it. He continued to work out at the gym up to about six months ago. While hospitalized in Tucson following brain surgery for a malignant tumor, some five months ago, he entertained the idea of a new screenplay that addressed the need for greater cooperation between people of varied ethnic and religious backgrounds, passionately hopeful he could attract some well known Hollywood icons to star in the movie. Roger was a wonderful son, daddy, brother and friend. He will be greatly missed. Roger is preceded in death by his loving parents; Antonio Casas and Lerpie Miller. He is survived by his beautiful daughter, Junying Tang; former spouse, Wenfang Zhu; and brother, Tom Casas. Roger was a constant support for Junying's formal education and musical aspirations as a pianist, Incredulously, while in a coma he showed clear signs of responsiveness to Junying playing some classical pieces that guided him to a more peaceful last breath some twenty minutes later. Visitation is scheduled for 3:00-5:00 in the afternoon, Sunday, Oct 17, 2021 at Sunset Funeral Home-West, 480 N. Resler Drive, El Paso, TX. Graveside Services will be held Monday, October 18, 2021 at 2:30 pm at Fort Bliss National Cemetery. Those who cannot attend in person may join the funeral and memorial services virtually on Face book Live at https://www.facebook.com/sunsetfuneralhome (no account is needed). Services are entrusted to Sunset Funeral Home-West.

The family of Roger D. Saldariaga created this Life Tributes page to make it easy to share your memories.

Send flowers to the Saldariaga family.