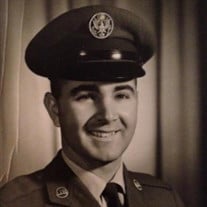 Rosario Fiore Jr., October 7,1934 - August 28,2021. Born in Brooklyn, New York, joined the Unites States Air Force at the age of 19 and was stationed at Biggs Army Field/Ft. Bliss El Paso Texas, he later joined the U.S. Navy Reserves in 1966 and retired in 1985 as a PO1 Under Water Mine Man. He also retired from the U.S. Postal Service stationed out of the Paisano Post Office in 1992. We are proud of his accomplishments and as a United States Veteran. Rosario had a wonderful life with his wife and four children, he is preceded with his beloved wife Margarita Jurado Fiore and his parents Rosario Fiore and Adela Russo Fiore. He was truly the most devoted husband, beloved Father and Grandfather, he is survived by his Sons: Rosario Fiore III, Alberto Fiore, Daughters: Josefina J. Vance and Adela F. Rojas, Son in Laws: Clifford B. Vance and Enrique Rojas III. Grand Children: Veronica, Megan, Justin, Elizabeth, Kassandra, Alberto, Vanessa, Maximiliano and twins Ezekiel and Israel along with numerous Great Grand Children. With love in his heart, a joke or two and many well wishes for everyone, he is now in God’s hands watching over us as our Angel. We invite anyone who wishes to pay their respects and kindly ask you and your guests to wear a mask at the viewing and Church services, Thank You. Visitation will be from 4:00 - 8:00 PM, with Rosary at 6:00 PM, on Wednesday, September 8, 2021 at Sunset Funeral Homes- Northeast, 4631 Hondo Pass. Funeral Mass will take place at 12:00 PM, on Thursday, September 9, 2021 at Most Holy Trinity Catholic Church. Committal Service will follow at Fort Bliss National Cemetery. Please visit online registry at www.sunsetfuneralhomes.net.

The family of Rosario Fiore Jr. created this Life Tributes page to make it easy to share your memories.

Send flowers to the Fiore family.