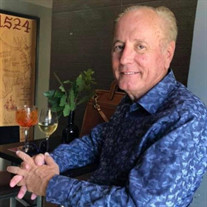 Steven Clifton James passed peacefully at home surrounded by family and friends on November 13, 2021, after a courageous battle with pulmonary fibrosis. He was a proud son, brother, husband, father, uncle, and grandfather. He was loved and cherished by many. Steve was born in Hobbs, New Mexico on January 23, 1953, to Janet and Clifton James. He was extremely proud of his New Mexican heritage. Steve and his brothers Mike and Tim grew up in multiple El Paso Natural Gas Pipeline communities. After graduating from Eunice High School in 1971, Steve went on to attend New Mexico State University. He then attended law school at the University of Texas, of which he became a lifelong fan. Steve enjoyed a life filled with the adventures of traveling, and was happiest when enjoying a glass of chardonnay. He loved supporting the arts and local businesses. With his family, he attended many concerts, plays, musicals, and movies. He expressed his love through gift giving most of all, and would collect presents from all over the world as he traveled. Celebrating all things El Paso brought him joy, such as being a season pass holder for UTEP football and basketball (no matter their records) and for the first five years of the Chihuahuas. He avidly supported the Longhorns and the Cowboys. Christmas was his favorite holiday, and he went all out in all areas to make it memorable every year for his family. Steve was a dedicated attorney and practiced law for 42 years. He spent most of his career as a sole practioner in El Paso, where he developed a reputation as one of the most formidable trial lawyers in West Texas. In addition to his active trial practice, Steve also won multiple cases in the Supreme Court of Texas. He served as Section Representative to the State Bar Board of Directors, Chair of the Texas Bar College, President of the El Paso Bar Association, and Chair of the State Bar Consumer & Commercial Law Section. He especially enjoyed being a frequent and popular Summer School CLE speaker in Galveston, where he annually vacationed with family as well. It was here that he developed a reputation for terribly off key singing in his presentations. His children fondly recall this singing as well, as each morning’s wake up call was a song that progressively got more off key the longer it took to you to rise. Steve was preceded in death by his parents, Jan and Clifton James, and his brother Tim James. He is survived by son Seth (Anna) and daughter Sarah and their mother Gayle, daughter Naomi (Julian) and her mother Robin, his brother Michael (Peggy), and sister-in-law Kim. He is also survived by his grand-children Nicholas, Andrew, Josephine, and Rye whom he loved dearly. Survivors also include Yvette Muir and her two children Jon Taylor and Ashley, as well as many nephews, nieces, friends, and extended family members. His beloved puppies Otis, Archie, and Calypso will be cherished by his family members. Services to celebrate the life of Steven C. James will be held at St. Clements Church, 810 N Campbell, El Paso, TX, on Saturday, December 4th, 2021 at 2:00 pm. Services are entrusted to Sunset Funeral Homes-West, 480 N. Resler Drive.

Steven Clifton James passed peacefully at home surrounded by family and friends on November 13, 2021, after a courageous battle with pulmonary fibrosis. He was a proud son, brother, husband, father, uncle, and grandfather. He was loved and cherished... View Obituary & Service Information

The family of Steven Clifton James created this Life Tributes page to make it easy to share your memories.

Send flowers to the James family.