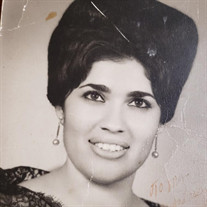 Maria Theresa "Terry" Lanahan, 83, was called to be with the Lord on November 18, 2021. Terry was born in El Paso on December 22, 1937 to Francisco & Carlotta Enriquez. After graduating from Roosevelt High School in Los Angeles, she and her family moved back to El Paso where Terry later began working for the City of El Paso Municipal Court in 1961. While working at Municipal Court, Terry met John Lanahan, Jr. and they were married in 1964. They went on to have 3 sons, and Terry was so proud that they followed their father's footsteps and became police officers. Terry worked at Municipal Court for 37 dedicated years as she retired in 1998 and became a full-time grandmother to all of her grandkids whom she adored. Terry was so proud of her kids and grandkids she was their biggest fan, always supporting every event sitting front row cheering them on. She would light up when spending time with her grandkids, and would talk about them to everyone and anyone who would listen. Terry was a very kind and generous person always making friends everywhere she went, she was a “people person” making conversation with anyone every chance she had and was very giving as she would perform random acts of kindness to perfect strangers. She will be sorely missed as she touched so many lives with her loving, caring, supporting spirit. Terry was the patriarch of the family bringing the family together to celebrate birthdays, special occasions, accomplishments, and holidays. Terry was predeceased by her parents Francisco & Carlotta Enriquez, her baby sister Elvia Enriquez, her brothers Oscar Enriquez, Ruben Enriquez, sisters Yolanda Ruiz, & Bertha Valdez. She is survived by those who will cherish her memory: husband of 57 years John Lanahan, Jr., sons John III (daughter-in-law Martha}, Kevin, Lance, grandkids John IV, Kevin, Joseph, Jacob, Alyssa, Adam, great grandchild Klay, brother Sergio Enriquez, & sister Alice Rodriguez. Visitation will be Wednesday, December 1, 2021 from 5:00pm to 9:00pm with Vigil/Rosary to begin at 7:00pm at Saint Joseph's Catholic Church, 3729 Hueco Ave. Funeral Mass will be held 11:30am on Thursday, December 2, 2021 at Saint Joseph's Catholic Church. Committal Service to follow at 1:00pm Thursday, December 2, 2021 at Evergreen East Cemetery, 12400 Montana Ave. Please visit her online tribute at https://www.sunsetfuneralhomes.net/m/obituaries/Terry-Lanahan/Memories.

Maria Theresa "Terry" Lanahan, 83, was called to be with the Lord on November 18, 2021. Terry was born in El Paso on December 22, 1937 to Francisco & Carlotta Enriquez. After graduating from Roosevelt High School in Los Angeles, she and her... View Obituary & Service Information

The family of Terry Lanahan created this Life Tributes page to make it easy to share your memories.

Maria Theresa &quot;Terry&quot; Lanahan, 83, was called to be with the...

Send flowers to the Lanahan family.