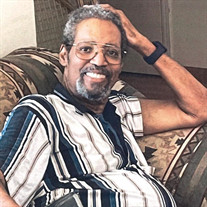 Washington Watley Jr., age 64, passed away peacefully after his battle with cancer on Saturday, October 2, 2021 in El Paso, Texas. He was a wonderful husband, father, son and brother. Washington is preceded in death by his parents, Washington Watley Sr. and Dr. Sarah Watley- Beal. He is survived by his loving wife of 27 years, Marsha Watley, his daughters, Samantha Watley, and Rachel Watley, and his siblings, Wayne Watley and Washley Sites. He is also survived by many extended friends and family to cherish and honor his memory. After Sarah was hired as a sociology professor at UTEP, she and the boys relocated to El Paso, TX. Washington graduated from Coronado High School in 1975, where he was a proud member of the T-Bird Marching Band. He attended UTEP, where he was a member of the UTEP Marching Band and jazz ensemble. While at UTEP, Washington learned about audio engineering from music faculty member, Charles Stanley. He did sound and recorded the many music ensembles, recitals and dance productions at UTEP, as well as for the early UTEP Dinner Theater productions before they used a live band. Washington also ran sound for Miner basketball games, graduation ceremonies, and concerts at the Special Events Center. Some of the performers were Willie Nelson, Rick James and Joan Jett and the Black Hearts. This experience helped him to get a job providing sound and mixing music at Fort Bliss. He was the audio engineer for Showtime USA from 1984 - 1994. Washington enjoyed running sound for the free concerts at Kelly Park. Some of his favorite acts were Peaches and Herb, Weird Al Yankovic and Ray Charles. After government cut backs caused the Music and Theater branch at Fort Bliss to close, Washington was hired by the National Park Service at the Chamizal Memorial Theater as an audio engineer. He enjoyed doing Music Under the Stars concert series, the Zarzuela festivals and providing sound for the Spelling Bee Championship. Washington took on the position as I.T. Specialist shortly after the birth of his second daughter, Rachel. Washington will be greatly missed by all who knew him. He was known for his intellect, his wit, his love of sci-fi, D&D, and especially his family and friends. Celebration of Life Services will be held Friday, October 15, 2021 at 11:00am at Faith United Methodist Church, 3500 Pershing Dr., El Paso, Texas 79903. Interment to follow at Memory Gardens of the Valley, 4900 Mc Nutt Rd., Santa Teresa, NM. Those who cannot attend in person may join the funeral and memorial services virtually on Face book Live at https://www.facebook.com/sunsetfuneralhome (no account is needed). Services are entrusted to Sunset Funeral Home-West, 480 N. Resler Dr. In lieu of flowers, please make donations in memory of Washington Watley, Jr. to Faith United Methodist Church, P.O. Box3896, El Paso, Texas, 79923-3896, or the American Cancer Society, P. O. Box 80323, El Paso, Texas 79708 or cancer.org.

Washington Watley Jr., age 64, passed away peacefully after his battle with cancer on Saturday, October 2, 2021 in El Paso, Texas. He was a wonderful husband, father, son and brother. Washington is preceded in death by his parents, Washington... View Obituary & Service Information

The family of Washington Watley Jr. created this Life Tributes page to make it easy to share your memories.

Washington Watley Jr., age 64, passed away peacefully after his...

Send flowers to the Watley family.