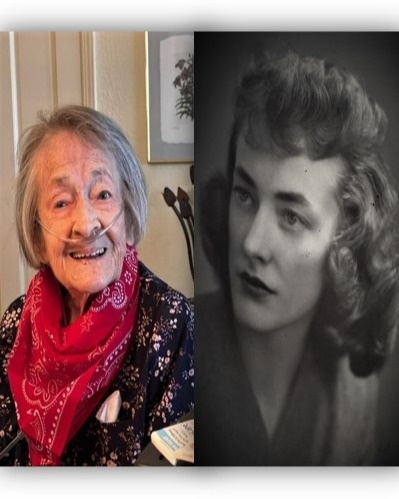 Annette Marie Bell, age 99, passed into eternal rest at her home in Santa Teresa, NM on Wednesday, September 21, 2022. She was a wonderful daughter, sister, wife, mother, grandmother and friend. She will be missed. Born January 6, 1923, to Alexander Koerner and Cecilia Weaver Koerner, the family moved during the depression to find a better life in Denver, CO. Shortly after the war, she met and married a handsome young Marine pilot, Marion S. ‘Jack’ Bell, who had been stationed with the Pacific fleet. Within a couple years, he had accepted a job at Phelps Dodge Copper Co, and they moved to El Paso, where they assumed civic as well as personal roles as their family grew. Annette served as ‘home school mom’ for her daughter’s class at Our Lady of the Valley Elementary School, joined the American Institute of Mining Engineers ladies’ auxiliary, learned to sew, to play piano, and to paint. She loved to go dancing with her husband.

They moved to New York when Jack was promoted to VP, then President of Phelps Dodge, but as soon as he retired, they returned to the El Paso area, where they both supported and volunteered for War Eagles Air Museum in Santa Teresa, where she had a lifetime membership in support of their educational mission.

Annette is preceded in death by her dear parents, Alexander and Cecilia, her loving husband, Jack, her siblings, Basilia, Sye, and Eddie Koerner, and most of her friends. She is survived by her devoted children, Greg Bell, Alexis Bell Gray (James) and Mark Bell; and her dearest grandchildren, Jennifer Gray, Dr. James Gray Jr., Michael Bell-Rao, and Charisma Bell Lauritzen. She is also survived by extended family and remaining friends, who cherish and honor her memory.

Visitation will be held at 11:00 am on Friday, October 7, 2022 at Sunset Funeral Home-West, 480 N. Resler Drive, with a rosary to follow at 12:00 pm, then a brief liturgical service. Interment to follow at 2:30 pm, at Fort Bliss National Cemetery. Those who cannot attend in person may join the funeral and memorial services virtually on Facebook Live @ https://www.facebook.com/sunsetfuneralhome (no Facebook account needed.) In lieu of flowers, charitable contributions may be made in Annette’s name to War Eagles Air Museum or the charity of your choice.

To send flowers to the family in memory of Annette Marie Bell, please visit our flower store.