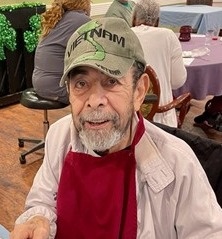 SFC Raul Rodriguez Sr. USA (Ret) was called into the arms of God on May 17, 2022 at age 83.  He enjoyed a long life that included a twenty-year military career in the United States Army, serving two combat tours in the Republic of Viet Nam as well as serving with units in the U.S. as well as Germany.  He had remained in contact with and was dedicated to those who served during war time.

SFC Raul Rodriguez Sr. USA (Ret) enlisted in the United States Army in 1956 and began his career at Fort Bliss Texas.   He retired from the Army in 1976 at Ft. Hood Texas.  His military awards include: the National Defense Medal, Army Commendation Medal, Good Conduct Medal, Republic of Viet Nam Campaign Medal, Vietnam Service Medal with 1 silver service star, and the Vietnamese Cross of Gallantry with Palm.

He felt a kinship with the men who served in Vietnam. He had been active in the Brotherhood of Vietnam Vets for many years. He also maintained contact with some of the men he served with.  One of those men recently wrote, “ I had a great respect for him. I spent my entire tour of duty with him and would have followed him anywhere.” Following Raul’s retirement from the U.S. Army he was employed by the St. Joseph’s Catholic Church in Killeen, Tx and drove the bus for St. Joseph’s Catholic School for many years.  He was an avid gardener and would start growing plants in the Spring so that he could fill the plant booth at St. Joseph’s annual Octoberfest. He was a very social person and could talk your ear off if you got him started on the right subject. He was a very good dancer and had a love for animals.  In his latter years he proved that it’s never too late to learn and earned a Bachelor’s Degree in Education.

To send flowers to the family in memory of Raul Rodriguez, please visit our flower store.