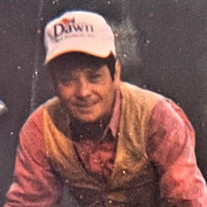 Arturo Lopez Torres died peacefully in his sleep June 14, 2021. ‘Tury’ was born November 17, 1957 in El Paso, TX to Juana and Asuncion Torres. He attended Jefferson High School, where he met the mother of his children, Yolanda. After high school, he enlisted in the United States Navy and soon after his first child was born, his son Francisco. Followed by his first daughter, Iris and then his beautiful baby girls, Ashley and April, many years later. Although, their marriage did not last, the love Arturo and Yolanda had for each other shined through with these four beautiful blessings they called their children. Tury continued his education at Le Cordon Bleu College of Culinary Arts-Scottsdale, where he earned his associates degree and went on to become an executive chef at a four-star resort in the beautiful hill country of Texas before finally retiring due to health issues. Although, he was retired, he loved to cook many delicacies for his loved ones, including his beloved grandson, Patrick, who he truly loved with all his heart and affectionately called his ‘Little Buddy’, because he would find happiness as he taught Patrick how to fish when they were camping. Just like he did with Francisco and Iris when they were young, too. Nothing brought pure joy to Arturo’s heart like it did when he saw Patrick’s face light up with that beautiful Torres smile. It’s not to say that he was only like this with his children, but his nieces and nephews, too. He loved them all so very much and was known to be the silliest uncle and would do anything to make them smile. Including, making them sushi and other dishes because he believed that a full tummy meant a full heart and a full heart meant a big smile on the faces of those he cooked for. These are the same beliefs he instilled in both of his older children, as well many others who adored and appreciated all that he did for them. Arturo is survived by his son, Francisco ‘Pancho’ Torres (Sofie), Iris Torres-Gamez (Mike), Ashley Brooke Torres & April Santi-Mendoza (Codey) and his three grandsons, Patrick E. Torres (Iris), Francisco ’Panchito’ Torres Jr. (Francisco) & Miles R. Gamez (Iris). He is preceded in death by his father, mother and his two brothers, Rafael and Armando Torres. In lieu of flowers and on behalf of my father and countless of other veterans who struggle with mental illnesses, please feel free to make a donation to National Alliance on Mental Health Illness (NAMI) at https://donate.nami.org/give/197406/#!/donation/checkout?utm_source=globalNav&utm_medium=website&utm_campaign=DonationTracking&c_src=WEBINT Arturo L. Torres, 63, Gathering of Remembrance will be from 4:00 PM to 8:00 PM with a Memorial Service at 6:00 PM, Friday, June 18, 2021 at Sunset Funeral Homes - East, 750 N. Carolina. Inurnment will be held at 9:30 AM, Monday, August 30, 2021 at Fort Bliss National Cemetery.

Arturo Lopez Torres died peacefully in his sleep June 14, 2021. &#8216;Tury&#8217; was born November 17, 1957 in El Paso, TX to Juana and Asuncion Torres. He attended Jefferson High School, where he met the mother of his children, Yolanda.... View Obituary & Service Information

The family of Arturo L. Torres created this Life Tributes page to make it easy to share your memories.

Send flowers to the Torres family.