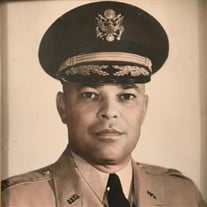 Lt. Colonel Charles A. Lopez Sr. United States Army (Retired) born December 4, 1926 went home to be with the Lord Saturday, July 17, 2021 at the age of 94. He was a loving husband, father, brother, grandfather, and great grandfather and will be missed dearly. He was a lifelong resident of El Paso, TX. He honorably and proudly served his country in the United States Navy during WWII and in the United States Army Air Defense Artillery during the Korean and Vietnam Wars. After 26 years of service he retired as a Lieutenant Colonel. He graduated from El Paso High and Texas Western College, now UTEP. Besides his tours of duty in Korea and Vietnam he served at Ft. Bliss, TX , Ft. MacArthur, CA, Tacoma, WA, and two tours in Germany. Other than the usual campaign metals, he was awarded the Bronze Star and the Legion of Merit for exceptional meritorious achievement in ground operations against hostile forces. He was then employed and retired for a second time from the Texas Employment Commision. He was a member of the following organizations: Knights of Columbus Diocese, Disabled American Veterans, Veterans of Forgein Wars, American Legion, the Military Officers Association. He is preceded in death by his parents; Margarita and Mariano Lopez Sr., his siblings; Marion Y. Lopez Jr. and Martha Ortiz. He is survived by his loving and devoted wife of 70 years Mary Lopez, and his children; Charlene Bonham (Jack), Charles Lopez Jr. (Lani), Steven Lopez (Cindy), Lori Laje (Gonzalo), and his beloved brother; Jerry Lopez (Carmen) of Vista, CA. He is also survived by his 10 loving grandchildren (CharlaAnne, Christa, Tristen, Larissa, Brian, Brit, Kirsten, Kevin, Danielle, and Jordan) and 15 great-grandchildren. Vigil Service will be held on Wednesday, July 21, 2021 at 3:00PM with Memorial Service to follow at 3:15PM entrusted to Sunset Funeral Home-West, 480 N. Resler Dr. www.sunsetfuneralhomes.net Interment with full military honors will be held at Arlington National Cemetery at a later date. In lieu of flowers, donations can be made to the Children’s Cancer Society. Facebook Livestream: https://www.facebook.com/sunsetfuneralhome/

Lt. Colonel Charles A. Lopez Sr. United States Army (Retired) born December 4, 1926 went home to be with the Lord Saturday, July 17, 2021 at the age of 94. He was a loving husband, father, brother, grandfather, and great grandfather and will... View Obituary & Service Information

The family of Charles A. Lopez Sr. created this Life Tributes page to make it easy to share your memories.

Send flowers to the Lopez family.