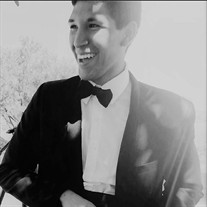 David Joseph Chacon beloved son, brother, uncle, nephew, cousin, & friend, 22, passed away on August 14, 2021. He was born on March 11, 1999 in El Paso, TX to Alfonso Chacon & Cindy Salcido. David was a loving son, brother & uncle to his nephews and nieces. David was an athlete, where he excelled in wrestling, football, & basketball. He was a two-time youth state wrestling champion & lettered his freshmen year where he helped his team win their first district championship at Chapin High School. David lived in Salt Lake City where he enjoyed snowboarding and hiking. He worked as valet in Dallas & Arlington where he loved driving Bentleys, Ferraris, & other exotic sports cars. David is survived by his father, mother, his stepfather, Jesus Gamon, his sisters, Crystal Marlene Salcido & Emily Christine Chacon, his brother-in-laws, Alejandro Paz Jr. & Ryan Rodriguez, nephews, Izaiah Alexander and Dominic Jakobe Paz, his nieces, Lexi Brielle and Allie Paz, his stepbrothers, Jesse Gamon, Jon Gamon, Jacob Gamon, & his stepsister, Victoria Gamon. A very special thank you to our family and friends who have reached with prayers, kind words & love for David. The outpouring of everyone’s prayers and generosity is greatly appreciated by our family. We also want to thank David’s coaches who had a very positive impact on his life. God has David in heaven, but we have him in our hearts. Visitation will be from 1:00pm to 5:00pm with a Rosary at 1:30pm on Saturday, August 28, 2021 at Sunset Funeral Home Northeast, 4631 Hondo Pass Drive. Please visit his memorial at www.sunsetfuneralhomes.net. Services entrusted to Sunset Funeral Home Northeast.

The family of David Joseph Chacon created this Life Tributes page to make it easy to share your memories.

Send flowers to the Chacon family.