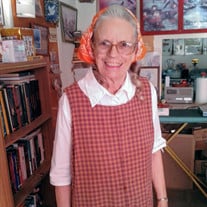 Annette Mills, 82 1939-2021 This is the story of a painfully shy Ohio homebody who didn't like crowds -- yet she went on to travel extensively, evangelize and live in homes overflowing with as many as 14 other people! It is our beloved mother, Annette Mills. She would wish her life to stand as a testimony that God can do much with little, and a reminder of Jesus' promise that "the meek will inherit the earth.” She would also like everyone to be told of God’s gracious offer of salvation as explained in Romans 10:9-10 “That if you confess with your mouth, “Jesus is Lord,” and believe in your heart that God raised him from the dead, you will be saved. For it is with your heart that you believe and are justified, and it is with your mouth that you confess and are saved.” Florence Annette (Gregg) Mills, of El Paso, died Aug. 4, 2021, in Lubbock, Texas. Annette was a woman of God, a devoted wife and beloved mother. She was born May 4, 1939, in Harrisburg, Pa., to loving parents George and Helen Gregg. She grew up in Ohio, with her brother, George Gregg, and a dear friend, Sandy, graduating from Withrow University High School in 1957. Her goal in life was to bring others to salvation in Christ, and she attended University of Miami-Ohio with the intention of becoming a missionary in Africa. However, at age 23, she met a charismatic street preacher, Theodore Ralph Mills, in Cleveland, Ohio. Ted helped this quiet and unassuming woman to overcome her shyness enough to share the gospel, via a gospel tract, with anyone that walked by. They eloped soon after meeting, on June 13, 1962, and Annette's life went immediately from mundane to unexpected. They moved frequently as Ted worked to "win the world for Jesus" in cities throughout the U.S., and Annette cared for their growing family. This remarkable woman, who never felt comfortable in crowds, became a mom to 13 children. She would spend hours each day caring for the needs of her family. She was a hard worker, had a cheery personality, was a good listener and had a soft and gentle spirit. Annette also made time to develop her own passions, reading her Bible and missionary books, drawing, painting and memorizing the flags of almost every country. She shopped for "good deals," bringing home books, arts-and-crafts projects and whatever she could find that was marked down. She sewed her own clothes and head coverings, and created her own unique style, with single curls hanging on each side of her gracious smile. She was artistically inclined, and incorporated biblical principles into her unique art projects. Memorable creations include a manger scene made out of shampoo bottles, a Proverbs 31 quilt, and a painting of a hot air balloon with her 10 sons in it, proclaiming the Great Commission. Ted was the face of their street ministry of more than 30 years spent in evangelizing downtown El Paso through gospel preaching and handing out tracts. Annette supported him in this work, and also served the Lord in her own, quieter way. When Ted died in 2014, Annette had to figure out a new life after 52 years of marriage. It was a challenge, as she said she felt like she’d lost everything. She described him as "my man" and would smile as she remembered her life of adventure to share Jesus Christ everywhere they went. Annette began to figure out different ways she could continue to share Christ. She became a volunteer and taught with Child Evangelism Fellowship in the local school system. She also shared tracts, prayed and attended Bible studies. She never lost her love of foreign missions and was a longtime supporter of a church in Juarez, Mexico. Annette continued to live in their longtime El Paso home, and she devoted her time and energy to God's work and continued care of her family. She enjoyed games, time with her church friends, and relished time with her children and grandchildren, who remember her for her faith, untiring work and beautiful smile. She was preceded in death by her parents; husband; and sons Luke and Paul Mills and grandson Josiah Mills. She is survived by her children (and spouses): sons John (Larcy), Matthew (fiance’ Danica), Samuel, Stephen (Katie), Joel (Megan), James, Philip and Benjamin (Laurie) and daughters Rebecca (Otto), Esther and Rachel (Timothy); grandchildren Gregg, Job, Nathan, Austin, Joshua, Jenny, Zachary, Alex, Stephanie, Daven, Christian, Christina, Ryan, Kylie, Tessa, Zach, Judah, Clayton, David, Madeleine and Evelyn. She is survived by her brother, George (Sherry) Gregg. Through the years, the Mills family were blessed by a number of fellow believers they count as dear friends, including Bob Stewart, Mr. and Mrs. Jim Hunt, Patrick Shing, Mr. and Mrs. Dai, Pastor Mike Woods, and the people of Coronado Baptist Church, El Paso Chinese Baptist Church and Grace Chinese Baptist Church. The family thanks these friends and churches and Sunset Funeral Home for its personalized and gracious care during this difficult time. Annette Mills, will have joint services with her son Paul. Their viewings will be held on Thursday, August 26 from 5-9pm. A time of praying and sharing will start at 7pm. This will be held at Sunset Funeral Home West, 480 N. Resler Drive, El Paso, TX 79912. The joint funeral services will be held on Friday, August 27 at 10:15am at Coronado Baptist Church, 501 Thunderbird Dr., El Paso, TX 79912. In lieu of flowers please consider supporting one of these ministries in Annette's honor. Coronado Baptist Church, https://www.cbcelp.org/give; Child Evangelism Fellowship Rio Grande Chapter at https://www.cefwesttexas.com/donate ; or Evangelical Tract Distributors in Edmonton Alberta, Canada, http://www.evangelicaltract.com/.

Annette Mills, 82 1939-2021 This is the story of a painfully shy Ohio homebody who didn't like crowds -- yet she went on to travel extensively, evangelize and live in homes overflowing with as many as 14 other people! It is our beloved mother,... View Obituary & Service Information

The family of Florence Annette Mills created this Life Tributes page to make it easy to share your memories.

Send flowers to the Mills family.