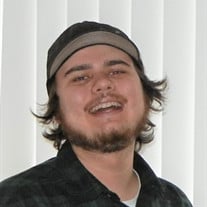 KENNETH MICHAEL FORD June 19, 1988 - June 21, 2021 Our beloved Kenneth (Kenny) Michael Ford passed away June 21, 2021, in San Diego, California at the age of 33. He was born in Redondo Beach, California on June 19, 1988. He was also a PROUD member of the Ysleta Del Sur Pueblo Tribe. "Little" Kenny loved everything and everyone. Even though he was born and raised in Calif., he resided in El Paso, Texas, for a few years as a young boy. His family and friends meant the world to him and he would do anything to help anyone he could. Kenny worked for Tigua Inc. (an entity of Ysleta Del Sur Pueblo) in San Diego, Calif. for 3 years. He loved sports and especially basketball. The Lakers held a special place in his heart and Kobe Bryant was his absolute favorite player. The Denver Broncos was his football team. He also enjoyed Japanese Animation (anime) and that's where he got the name for his first and only fur-daughter, Yachiru (Yachi). He enjoyed Marvel and Star Wars and movies of all kinds. When it came to music, Kenny would listen to anything; his music tastes could be likened to someone as having an 'old soul'. He would give any genre a try at least once. He was an Emo fan at heart and had plans to attend a Dashboard Confessional concert in the coming months. Kenny is preceded in death by his father Kenneth J. Ford and his paternal grandfather Donald H. Ford. He will be missed every day by his surviving family: his mother Sylvia (Cortez) Torres, his stepfather Eddie Torres, his sister Nicole (Ford) Portillo (spouse: Alex), his paternal grandmother Ann (Toscano) Ford, his maternal grandparents Gloria Cruz and Pascual Cortez, and his niece Christina A. Portillo, and nephew Alex Portillo II. Kenny leaves behind multitudes of aunts, uncles, and cousins who loved him deeply both in El Paso and California. His family and friends wish everyone to know how much they cherish any and all memories you would like to share. A visitation will be held from 9:30 AM to 11:30 AM with a rosary starting at 11:30 AM and a Mass to follow at 12:00 PM on Tuesday, July 06, 2021 at Our Lady Of Mount Carmel Mission Church. Graveside to follow at 1:30 PM at Mount Carmel Cemetery. Pallbearers: David Isaiah Briseno, Henry ("Rick") Cortez, Matthew Cortez, Michael Cortez, Rudy Cruz Jr., Nathan Peranelli, Alex Portillo, Anthony Valenzuela, Honorary Pallbearer: Ryan J. Puchi. Services entrusted to Sunset Funeral Home- Americas.

The family of Kenneth Michael Ford created this Life Tributes page to make it easy to share your memories.

Send flowers to the Ford family.