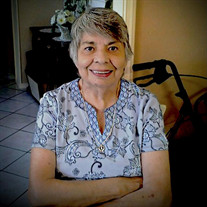 Molly (Amelia) Torrez Jordan died Sunday June 6, 2021 at age 83. She was born August 1,1937 to Reyes Guerra Torrez and Antonia Aguirre Serna, in Hatch New Mexico. Her birth at home was notably the first baby in the area delivered by a doctor in the area. Her family moved to Hurley, New Mexico where her father worked at the Kennecott copper mine. They lived in what was then a segregated community separated by the train tracks that ran through the town. She learned to speak English at the elementary school where Mexicans and Anglos were separated. Molly went on to graduate from Hurley High School where she enjoyed being in the drama club and leading the bunny hop at dances. She attended Regina Nursing School but left in order to discover what big city life like was in Albuquerque, NM. There while working at the Air Force Officer’s Cub, she met a charming southern enlisted man from Mississippi - Ira Tillman Jordan. He swept her off her feet and much to the warning of her Uncle Tony and Auntie Lou (who later became best friends of his) she and and Jordan (Ira) married on April 19, 1958. They had five children together: Ray Anthony, Kimberly Ann, Mark Anthony- in Albuquerque; Myra Eileen- in Santa Fe, and Rosslyn Arleen when they moved and settled in El Paso in 1969. Molly, or Nana as she became known to so many, worked throughout her life at many jobs and retired as the Office Manager for American Minerals after 30 years of employment. She was the quintessential hostess, and adored entertaining. The bigger the party, the better. She was happiest seeing her friends and family gathered together. In her later years, her greatest joy was spending time with family and watching her great-grandchildren play. Nana loved to sneak them sweet treats and spoil them any chance she got. She was predeceased by her husband Ira Tillman Jordan just before their 68th anniversary, her parents Reyes and Antonia Torrez, parents in-law Earnest and Annie Alois Jordan, her son Ray Anthony, daughter Rosslyn, and her aunt and best friend Sadie Swall and her husband Ross Swall. She is survived by her children: Kim Alcantar and husband Joe; Mark Jordan; Myra Breck and husband Ben. In addition, she continues her legacy through her eight grandchildren: Ricky Alcantar, Kara Garis, Liana Paul, Emma Alcantar, Grant Jordan, Beckah Jordan, David (Paco) Ariza and Jordan Breck; and 10 great-grandchildren. She also leaves behind her much loved sisters Sallie McDonald, Irene and husband Jerry, and their children, and many cousins and sweet friends, particularly Carol and Ken Lawrence and DeDe and Bob Tollen. Each one of them has been a means of joy and support throughout the years to her and all of us in the family. We will forever treasure the time we had with her, and she will never be forgotten. Te Amo, Te Amo Mucho!

Molly (Amelia) Torrez Jordan died Sunday June 6, 2021 at age 83. She was born August 1,1937 to Reyes Guerra Torrez and Antonia Aguirre Serna, in Hatch New Mexico. Her birth at home was notably the first baby in the area delivered by a doctor... View Obituary & Service Information

The family of Molly Jordan created this Life Tributes page to make it easy to share your memories.

Send flowers to the Jordan family.